A Lesson from Steak 'N Shake

Hello again! We had another trip to the cardiologist last week. Ramona and I are heading to California tomorrow for the LuLaRoe convention (which I'm equal parts excited and nervous about), and they wanted to check and make sure she is still okay to travel. Our quick check ended up being a long day, but my Mom was along to keep us company since Nathan couldn't get off work. Thanks, mom!

We arrived early for our appointment, and when we tried to check-in they couldn't find us on the schedule. I looked it up, and they had told us to come that day, so they said they could see us anyway. Phew. (Side note, hopefully you never have to visit the congenital heart center, but if you do you will be very well cared for! We are very grateful to have such a good place to take Ramona and to have such wonderful nurses and doctors.) We were just seeing a nurse practitioner this time instead of our regular cardiologist, and we had to wait for her to be available since they forgot we were coming. The NP took her blood pressure 2 or 3 times, and it was high, which they didn't like. She also asked about her wet diapers, and it's a good thing mom was there to answer it, because I didn't realize she was having fewer wet diapers during the day. I also told her that Ramona has started sweating again (she was hardly sweating at all when she first started taking her medicine). Between all of those things, the NP wanted to call our cardiologist to come in and see us.


When the cardiologist arrived, she checked Ramona's blood pressure again and got a good reading this time. She was still a little concerned about the other issues and said she was probably just being over-cautious, but she wanted to do another echo while we there just to make sure. She's only seen Ramona twice, so she's still getting to know her and the anatomy and behavior of her heart. We weren't expecting to do an echo today, so we weren't on the schedule (though I guess we wouldn't have been on the schedule this particular day anyway...), so we had to wait a while until they could squeeze us in.

All of the waiting makes for a long day, but I'm am totally fine with waiting and being over-cautious for her. I'm just glad they were able to get us in. Ramona has done such a good job for all of her echos so far. I think it helps that she hates lying on her stomach, so she never tries to roll all the way over. It was funny that she kept watching what was going on this time.


We waited to see the nurse practitioner again, and she said that Ramona's heart is still the same, which is still good news for us. They gave us the green light for our trip next week with instructions to keep her hydrated, out of excessive heat (we wouldn't be able to tell if she's sweating just from the heat or if she's having trouble with her heart), and to increase the dose of her medicine to help with the symptoms we were noticing.

We had a laaate lunch (at Chick-fil-a, of course), ran an errand, and then swung through the Steak 'N Shake drive thru to get a happy hour treat for the trip home. I ordered a dark chocolate shake (one of my favorite desserts on the entire planet) and mom ordered a Coke Zero (one of her favorite things on the entire planet, second only to her second born daughter [moi]). We should have tried them before we drove away, because mine turned out to be a peanut butter chocolate shake and mom's was an unsweetened tea. So, not as much of a treat as we had hoped. But boy am I glad that was our biggest disappointment of the day! I think they were just trying to remind us that it's okay to double check and be cautious. ;)

We're working on "going on as normal," but also trying to make time for special things in case we can't do as much later. We took a fun family trip to St. Louis to go to the zoo, the science center, and a baseball game. Here are some pictures because these girls are too cute: 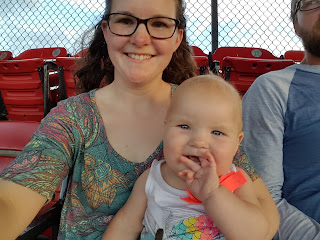 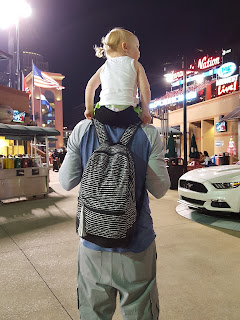 And a couple random ones:

We're so thankful that Ramona is still holding steady, and we hope that continues for a long time. Thank you so much for continuing to pray for her (and all of us). We know that our prayers are being heard!

With that being said, PLEASE continue to lift her in prayer. We have several things you can pray for right now:

*Sigh* We're still battling on the medicine front. And, with her increased dose, there's even more to fun to be had. :) Okay, here's a list for real:

A Good Checkup and a Wedding Weekend

Hi again! We had another trip to the cardiologist at the end of last week, and it was a good visit. We're still waiting for the genetic tests, but they did another echo on her heart and it was not any worse than the echo that was done 2 weeks earlier. We had no idea how quickly her heart might be changing, so it is good news that it didn't get visibly worse in that short time. Before the appointment, I was very worried that we would just have to stay in the hospital for good this time, and we are so thankful that we don't have to do that yet. We were also told that they definitely will NOT do any kind of surgery with her heart at its current state. Ramona is still acting normal and is getting enough oxygen right now, so they will wait until things change/get worse before they do anything. We were also very glad to hear this news. We don't know when things will change or if it will be a sudden or gradual change, but, at least for now, we have some indefinite, non-specific amount of time. Which we will gladly take. :) They said her diagnosis is very difficult, because they usually have a traceable family history where they can see a pattern of things happening around a certain age or at a certain rate, but we have no such reference for her.

Her medicine is doing its job and slowing her heart rate, which is good news, too. They were able to measure the force of the blood moving through her heart this time (they couldn't at the original appointment because it was going to fast), and it is in a good range (good for her, at least). Her heart isn't having to work as hard and the flow isn't as turbulent. The problem we're having is that Ramona has made it VERY clear that she does not like her medicine. She now starts spitting as soon as she sees the syringe before we even try to squirt the medicine in her mouth. It is a very frustrating battle that we have to fight every 8 hours. I know (or at least hope) she'll get used to it eventually, but right now it's exhausting and often ends with both of us crying. But we keep at it because we must. I think I probably just need to get a little more rest, too. We were able to shift her medicine times over the last few days, which will be very helpful in the sleep department. One of her doses was falling at 2:00 AM (😬), and we've now gotten it so that she has doses at 10:00 PM and 6:00 AM and nothing in the middle of the night. I think it will be much better for my sanity.

Another important thing we learned at this appointment is that a transplant might not be our only option. When we reach the point where something needs to be done, if the thickened (ugh. I hate that word now.) muscle is not obstructing a valve, it might be possible to do an open heart surgery and carve part of the muscle out rather than doing a transplant. It's still a major surgery and scary to think about, but, if it's a possibility when the time comes, it would be a better option than a transplant and have a better outlook afterwards. Like I said before, they aren't going to do anything at her current state, so we'll have to wait to see where/how/when things change before we make any plans. It was encouraging to hear that there is at least a chance we might have another option. I think I had been exhausting myself with worry leading up to this appointment, and I felt so much better after all of the things we learned that day. I napped real hard on the way home.

After her appointment, we spent the rest of the weekend in a whirlwind of excitement getting ready for my little sister's wedding! Ramona had a big role to get ready for: her debut as a flower girl! I don't think she took her job very seriously, though. She slept through most of the ceremony and one of the junior bridesmaids had to carry her in sound asleep.

It was so nice that the girls could be part of such a special day. I'll have to share some better pictures of their cloud-like fluffiness after I can get a hold of the official wedding pics. :) For now, we're still doing our regular activities, we just try to keep Ramona from getting too hot since she gets soooo sweaty. As of now, we're still planning for me to go to the LuLaRoe Convention in California later this month, but we'll have another trip to the Cardiologist on the 19th to make sure everything is still the same before we go. They'll send a bunch of medical information with us in case anything happens while we're gone, and we'll keep sweetie baby indoors to stay cool. Oh, and the "we" here is referring to myself and aunt Georgie, who is tagging along so I'm not by myself with Ramona. And for extra fun, of course :)

Also, I just want to say real quick, we really appreciate all of the help, extra thoughts, notes, etc that have come our way these last few weeks. We've received so many perfectly timed little bits of encouragement and rays of sunshine. Thank you for brightening our days and thinking of our littlest girl and our family.

Here are a few prayer requests we would appreciate you lifting up with us:
- Healing for Ramona (spoiler alert: this one will always be on the list)
- For Ramona to take her doggone medicine without us having to fight her every. single. time.
- That we don't let worry and tension spoil our days
- And, of course, thanksgiving that her condition hasn't worsened and that she still acts like a regular, happy baby


"Let them give thanks to the Lord for his unfailing love
and his wonderful deeds for mankind,
for he satisfies the thirsty
and fills the hungry with good things."
Psalm 107:8-9