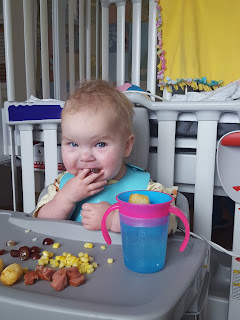 We're sitting in a waiting room for several hours today, which gives me the opportunity to finally update with some more information. Our days have been very busy, not only with doctor visits, EKGs, and such, but also with trying to keep an active baby occupied. She can't leave her room because she is in isolation because of her cold (she still has a bit of a cough and runny nose, but they say her lungs are sounding better), and she can't really move around very easily because she always has so many wires twisted up. Our room is very small, which also makes it tricky. We do a lot of furniture rearranging throughout the day to try to make our space work. It's tiring trying to keep her occupied all day. Thank goodness we brought the iPad so that we can at least let her watch some Netflix to break up the day.

Anyway, down to business. The doctors here are ultimately trying to decide what will keep Ramona the safest in the long run. The three possibilities they are trying to decide between are a pacemaker, an implanted defibrillator, and a transplant. These are some pretty serious things for someone so small, so they are doing a LOT of testing to try and figure out what is going on in her heart to help them make the best decision. Besides just the thickness, they have to consider how well the heart functions, how much pressure (if any) is built up, whether there are electrical issues, and whether there is scar tissue.

Ramona is having some big time testing done today. We were hoping she would be over her cold by now, but no such luck. She's getting a cardiac MRI, cardiac catherization, and an EP study, possibly with an ablation. It's pretty invasive stuff with a lot of possible risks attached, but it's necessary in order for them to choose the best treatment for her. She'll be under anesthesia and have a breathing tube for several hours today. We don't know exactly how long it will be, because the earlier tests might indicate that more or less needs to be done with the later tests. We pray that they will get some good answers today and that Ramona will be safe.


We also, still, have no idea how long Ramona will have to stay in the hospital. I don't know how long it will take them to choose a course of action, and then I don't know how long of a stay will be required when they do choose. Hopefully today's tests will help us answer that question, too. Side note, we knew that Ramona's heart was much thicker than normal, but the doctors here said that it is 19x thicker than normal. 19 TIMES. Wowza. They also said that is is usually the inner wall (the septum) that is too thick, but in Ramona's case it's the entire left ventricle, which is unusual. Another odd thing is that people with this condition usually have issues with their heart rate being to high, but Ramona's problem is the opposite. Her regular heart rate varies from the 60s to 80s, and a normal heart rate for her age would be in the 110s. It gets even lower while she sleeps, which is why we have monitors going off so much in the night some nights. It's not uncommon for it to be in the upper 40s in the night. They also think that there might be an extra electrical connection that is affecting her rhythm. 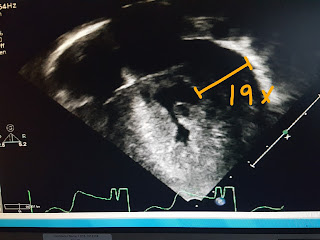 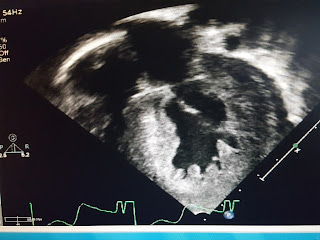 On a positive note, we got to see our sweet Daisy over the weekend. We Skype with her as much as we can, but it's just not the same as seeing her in person. She couldn't visit Ramona, but at least we got some time with her. I'll post some picks below.

PRAYER REQUESTS:
- For Ramona and the doctors during all of her tests today
- For her cold to go away
- For answers
- For rest
- For Daisy
- For Ramona's heart to be healed.

For God gave us a spirit not of fear
but of power and love and self-control.
2 Timothy 1:7